As some of you readers might now, I moderate a forum dedicated to Saturday Night Specials and other inexpensive guns. A few days ago, one of the forum users posted pictures of Cobra's newest offering called the Denali.

Let me start out with a little history on Cobra firearms. They were started in Utah utilizing existing firearm designs. What Cobra did was basically buy up the rights to guns made by firearms companies that'd gone belly up. They rebranded these designs and made minimal tweaks on some. Cobra makes old designs from Lorcin Engineering, Davis Industries, Talon Industries, Standard Arms of Nevada, and Republic Arms.

To the best of my knowledge, this is only Cobra's second original design. Their first was the Cobra Shadow revolver which is basically a copy of the S&W J frame. The new Cobra Denali is a big deal for those interested in Saturday Night Specials.

The Cobra Denali looks like Cobra's CA series of 32 and 380 caliber handguns. The major difference is the composition of the frame. The Denali has a polymer frame. This is a feature I've wanted for a long time in a gun smaller than a Hi-Point.

I'm curious to see how the Cobra Denali is put together. The design utilizes a fixed barrel that's pressed into the frame and held in place with a pin. The amount of metal around the barrel is minimal on the regular Cobra CA32 and CA380, so I'm curious to see how Cobra will be reinforcing that area.

The slide is a different casting, but still bares resemblance to the older CA series. The other interesting feature is that the gun has a push button magazine release which is a departure from the European style or "heel" release of the CA series. I'm curious to see the new magazines which feature a different finger rest and some kind of a provision for a push button magazine release.

Cobra didn't announce this new gun at SHOT show, they showed it on their Facebook page. That kind of sounds like a strange way to do things considering we're not that far away from the 2014 SHOT show. My guess is that they couldn't get it ready in time for SHOT. 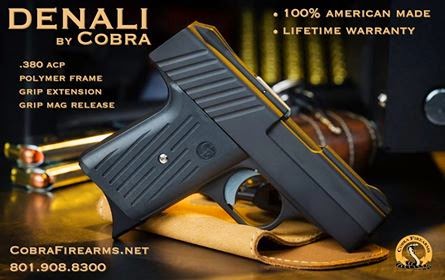 This gun will likely share some parts with the CA series. It just makes sense for them to use existing parts. Why design something new when you could just take something off the shelf that'd work just fine? Car companies do this all the time because it makes financial sense. The grips, grip screws, trigger, and extractor all look like they got lifted from the CA series. I assume the trigger bar, sear, and springs are probably also the same as those used in the CA series.

They're supposed to be shipping in May. I have already spoken to my dealer of choice and have expressed my interest in having one of the first ones to hit the showroom floors. They sell a lot of Cobras, so I'm confident that they will get one of the first ones.
Posted by The Gun Nerd at 10:04 PM