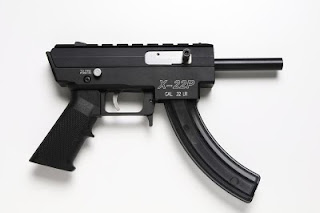 A new gun recently came on the market. I haven't seen a single article about it in any magazine or on any of the big gun blogs. This new product has become available but has remained mostly unnoticed.

The new gun is a 22LR handgun that vaguely resembles the old Tec-22. Like the Tec-22, it utilizes the ubiquitous 10/22 magazine, which is inserted in front of the grip. That is really where the similarities end. This new design uses an off the shelf AR15 pistol grip and has a built in rail across the top of the gun.

I first noticed the gun in September of 2010 while cruising Excel Industries' website. I just now decided to look for it online and found a few for sale on gunbroker. I think these guns would sell if consumers knew they existed. I mean it doesn't take much to get thefirearmblog or gunblast involved in a test/review. Traffic to those websites would undoubtedly equal an increase in sales.

Lets compare the Excel X-22P to the Ruger Charger. The Ruger Charger is identical to the 10/22 rifle from which it was based, except the Ruger Charger has a shorter barrel and a pistol stock. The Charger is manufactured and sold as a handgun, differentiating it from the 10/22. Both guns use the same magazines, both are pistols, and both have a similar layout.

The Charger has a lot of things going for it. Everyone who knows anything about 22LR rifles knows what a 10/22 is. A ton of people own 10/22s and are not only familiar, but comfortable with them. There is a whole cottage industry devoted to custom parts for 10/22s, parts which will fit in Charger pistols as well.

The real nail in the coffin for Excel is the price. It has an MSRP of $415 according to their website. That MSRP didn't bother me when I discovered the gun in September, because I know that guns rarely sell at MSRP on the internet. If guns do sell at MSRP, its usually right when they come out, and only if there is a line around the block to buy it. People are waiting in line to fork over their hard-earned dollars so they have the privilege of being the first kid on the block to have the newest gun.

Even this first wave of Excel X-22Ps on the market are priced below MSRP. You'd think if there was a big rush for this firearm, the guns would be getting snatched up left and right, maybe selling for over MSRP to start. The X-22Ps I've found on gunbroker are $379 including shipping. This price is still better than the $415 MSRP, but not low enough to entice buyers away from the familiar 10/22 and into the unfamiliar and untested Excel product.

I honestly didn't think that $379 shipped to my local FFL was such a bad deal.... until I went to look up the current pricing for a Ruger Charger. I was surprised to see the Charger selling for as low as $290 including shipping on the website for budsgunshop. The $89 price differential is just too much to make these somewhat similar products really compete against one another . Hopefully prices on the Excel will go down over time.

I'm a lover of the 10/22 platform and a self-proclaimed rimfire junkie. I'd still be willing to try something new (such as the Excel X-22P) because I like being a little different. I like showing people guns they havn't seen before. I don't have an AR-15, GLOCK, or 1911 and there's a reason for that. Everybody and their brother has one. You'll never hear someone say "Wow, an AR-15? I've never seen one of those before!" I don't want to have the same gun as the guy shooting in the lane next to me at the range. I want to have something that people haven't seen, a gun that spawns intrigue among those on the firing line. I can't get that with the Charger, even if it is $89 cheaper.
Posted by The Gun Nerd at 2:44 AM 7 comments: 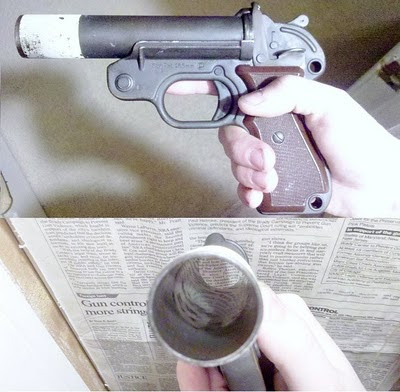 I purchased a box of 10 surplus 26.5mm flares at a gun show about a year ago for $25. Yes, I bought the flares before I bought a flare gun. I thought this would be a good idea because I just buy things when I see a deal.

I was looking through Numrich's website and found a GECO flare pistol for $36 in early January of 2011. I decided that I needed to have one at that price, considering when I see them elsewhere online they're $50 or more.

This flare gun was a better choice for me than buying an orion flare pistol intended for marine use. I have a small boat and have a need for a flare pistol. The feel of the Orion flare pistols feel extremely cheap. Being plastic, I don't have much confidence in them, so I was on the lookout for an inexpensive metal surplus flare pistol.

The flare gun I purchased feels solid, its definitely not a toy. Condition is decent, but not great. If this thing gets a little rusty on the boat, I'm not going to lose sleep over it.

The gun had some yellow duct tape on the barrel. The tape peeled right off, but left a white adhesive which just won't come off. I don't want to scrape it because I don't want to jeopardize its parkerized finish. I tried using goo-gone on the tape residue, but it didn't work. I think whoever put the tape on the gun later got it really hot (by shooting it), probably cooking that tape residue into the gun.

The bore has some spots, but whatever. I'm sure it'll shoot just fine for a flare gun.
Posted by The Gun Nerd at 7:14 PM 5 comments: