Today, I went to the Fredericksburg, VA gun show with a friend of mine. We go to a lot of shows together because we're both interested in the same kind of guns. We're not into tactical anything, hunting rifles, sporting shotguns, or Glocks. This 320 table gun show was on the smaller end, but there were still deals to be had.

I've heard several times that people don't see good deals at gun shows. I don't know how this can be. If you know what the exact same items are selling for at local gun shops as well as on gunbroker and online gun selling websites (such as AIM, classicarms, JGsales, and budsgunshop) you can better understand the prices at your gun show and see what tables are actually offering deals.

Today, I saw a table that had all hi point models for cheap. The 380s were 119. Good luck finding that gun anywhere else for that price. For $119 it could have been in my hands. Keep in mind, that's a gun I get to see before buying, can handle, check out, then decide to buy. There is no $25-40 FFL transfer fee and no shipping either when you're buying from someone at a gun show.

The sheer number of vendors at a large gun show means prices will go down. People are trying to price items well so they will sell, but they are conscious of their competition. Good deals get snatched up quick and the last thing that dealer wants to do at the end of the show is pack up all that stuff and take it home. If he's taking the stuff home, his money is tied up in the inventory, not making him a dime. If he moves products, he can go ahead and buy more for the next show, giving him fresh inventory.

Gun shows cost money. This one was $8 to get in, but I didn't mind paying that. I'd pay that to go to a movie, so I consider it an entertainment cost rather than adding it to my spending for the day. I have more fun in two hours at a gun show than I do watching a movie.

Keep in mind they don't only sell guns at your local gun shows, they also sell ammunition. Ammo is insanely priced at local gun shops. They have to charge a lot of money for their inventory because they have to keep the doors open, the lights on, and pay for stuff like rent and employees. A lot of gun show vendors operate out of their homes, making overhead next to nothing. Because they don't have a ton of other costs, they can sell things cheaper and still make enough money to live. I only ever buy ammo at gun shows or online. The beauty of buying at a gun show is often times the prices are just as good as buying online (and sometimes better than anywhere on the internet) and there's no shipping required. Ammo can be heavy, so when you're talking about buying 10 boxes of 9mm, not having to pay $15-20 shipping on that case is quite nice.

If i were to buy the cheapest 223 ammo available at Walmart (known for their good deals), I'd be paying $40 for 100 rounds of Federal FMJ 55 grain brass-cased ammo. For the same $40 at the gun show, I bought eight 20rd boxes of Greenshield frangible ammo. This stuff is brass cased, new production, and lead-free. I'll gladly take 160 rounds of frangible ammo rather than 100 rounds of FMJ.

I purchased two boxes of Tulammo 30 carbine at a whopping $12.50 per box. Using the ammunition search engine gun-deals.com, I found the cheapest Tulammo 30 carbine ammo going for 11.99 per box at cheaperthandirt. This is a good price, but keep in mind the cost of shipping. On two boxes, I'd be paying $14.10 in shipping. All of the sudden, that 11.99 per box ammo turned into 19.04 per box with shipping included. I'll gladly take the $12.50 ammo in my hands with zero shipping or waiting.

45acp is always expensive. At this show, I found it as cheap as 380. Try finding that at your local gun shop or Walmart. I bought two boxes of Tulammo for $14.50 per box. That's cheaper than walmart or anywhere online. Zero shipping to boot!

Now lets talk primers. I bought a box of 1,000 small pistol primers for $17.50. I got that price just buying one box of a thousand, not buying a full case of 5,000. The cheapest place I could find these primers online was 21.78 per box (have to buy a minimum of five) plus a hazmat shipping charge of $26. I did much better buying just one box and not paying any hazmat shipping either.

I also bought some surplus 8mm mauser ammunition. I bought this from my favorite ammo vendors, JandCsales. These folks are at many of the gun shows I go to and I always buy from them. Look them up if you're attending a show in NC, VA, MD, WV, PA, or OH. They routinely have the cheapest prices on ammunition, even at thousand table gun shows, which is why I've become a repeat customer. They sold me 50rds of Yugo surplus 8mm ammo for $10. This works out to 20 cents per round. I can get Yugo surplus 8mm for as low as 19.4 cents per round, but I'd have to buy 1,800 rounds from a website such as SGammo. I think I did well considering I only bought 50 rounds, not 1,800.

Here's a breakdown of my spending: 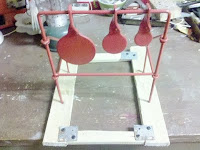 I ran across one of these while shooting at The Cove in Gore, VA. Someone likely left it there by accident. The target was great for 22s, but it would keep falling down. The ground at that shooting range was too hard to get the target to go into the ground. When I used my feet to try and push the target into the ground, I wound up breaking one of the welds. I decided I needed one for myself, and at only $14, it was mine.

I had to make a base for it while all of its legs were still in good shape. I knew if I took it out and tried it at an outdoor shooting range, that the legs would be bent in no time. I used a piece of scrap wood and cut two lengths of 16 inches each. I used some of the remaining wood to make crossbars, keeping the two 16 inch lengths parallel. I fastened it all together with plates and philips head screws. I pre-drilled to keep from splitting the wood. 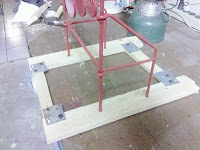 This should work out just fine. I already had the materials, so this quick project only cost me my time. The base that I made is rather thin, so it won't take up much space in the trunk on my next trip to the range. I'm keeping the box that the target came in for ease of transport.
Posted by The Gun Nerd at 8:53 AM 1 comment: